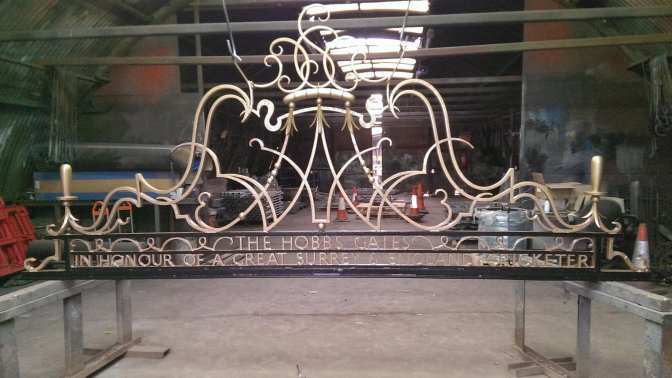 Kirkby in Ashfield based metal railings and gates manufacturer, Alpha Rail, have been appointed to restore the original Jack Hobbs Gates at the Kia Oval in London.

Significant changes were being made to the Hobbs Gate entrance to improve access at this historic entrance. Alpha Rail were appointed to remove the original Hobbs Gates and to restore them to their former glory. This involved transportation of the old gates back to Alpha Rail’s workshops to carry out the refurbishments and add the bespoke metalwork modifications required to re-fit the gates into their new location. The company also supplied additional railings for the perimeter wall running either side of the new entrance.

The Kennington area has a long history with cricket, the first reference being in 1730 when Surrey and Middlesex played on Kennington Common, now Kennington Park.

In 1835 a ten acre plot of land called the ‘Oval’ was leased to the Otter family. Ten years later a new sub-lease was agreed which allowed the land to be converted into a cricket ground, and later in 1845 the Surrey County Cricket Club was formed. The first county match was played in 1846 against the MCC.

In 1934 Jack Hobbs retired as the leading batsman in the world and the ‘Jack Hobbs Gates’ opened and became one of the major ground entrances at the Oval.

Phil Ball, sales director at Alpha Rail said, “The Jack Hobbs Gates are an important and iconic feature of the Kia Oval Cricket Ground. It was important to ensure that the gates retained their heritage but also ensure the new railings fitted in well with the new building work. We hope that Cricket fans will still think that the finished effect is still a fitting tribute to great player!”

It is with great sadness that we wish to announce that Perry Foster passed away last week following a long illness. Perry installed railings for […]

Here at Alpha Rail, we would like to welcome our newest employee Ethan. Ethan is our new Digital Marketing and Sales Apprentice who will be […]

An Introduction to Bow Top Railings

Bow top railings are made of vertical bars with bows above the top rail, which can be made in a variety of different styles depending […]