May 22, 2019 Posted in: Pedestrian Guardrail Posted by: Alpha Rail

Airbus is a multinational aerospace corporation that designs and manufactures aeroplanes for both civilian and military uses. The Airbus fleet of over 10,000 has completed more than 100 million flights, carrying 12 billion passengers. One of their most notable products is the Airbus A380, which is currently the largest airliner in operation. With the main headquarters being in France, Airbus has production and manufacturing facilities worldwide, in locations such as China, America and the United Kingdom.

Based in Broughton, North Wales, is the Airbus site responsible for the assembly of wings that are used on the commercial aircraft. Some of the main activities include wing box assembly, full wing equipping and wing skin milling. Once the wings are complete, they are transported to the final assembly lines in France.

Alpha Rail was approached by Steve Walker Fencing Contractors Ltd, who got in touch after seeing packaged Alpha Rail products on a previous occasion at the Airbus site. There was a requirement to replace a number of low-level hoops around the car park area, which at around 500mm high were not very effective in creating a barrier to guide pedestrians. People were taking shortcuts over the hoops and tripping over them, creating a safety hazard as people could fall into the road.

The plan was to remove the hoops and install Alpha Rail pedestrian guardrail into the sockets. To achieve this, bespoke panels were made to suit. In order for this to be successful, precise measuring had to be undertaken to make sure that the correct metalwork was manufactured.

Over 80 M1 pedestrian guardrail panels were delivered, including special length panels that would fill the gaps between the previously installed hoops. These were polyester powder coated to RAL 5022 blue to be consistent with the surrounding Airbus brand. Matching metalwork with corporate colours can be an effective way to add a professional look to your site and further communicate your brand. 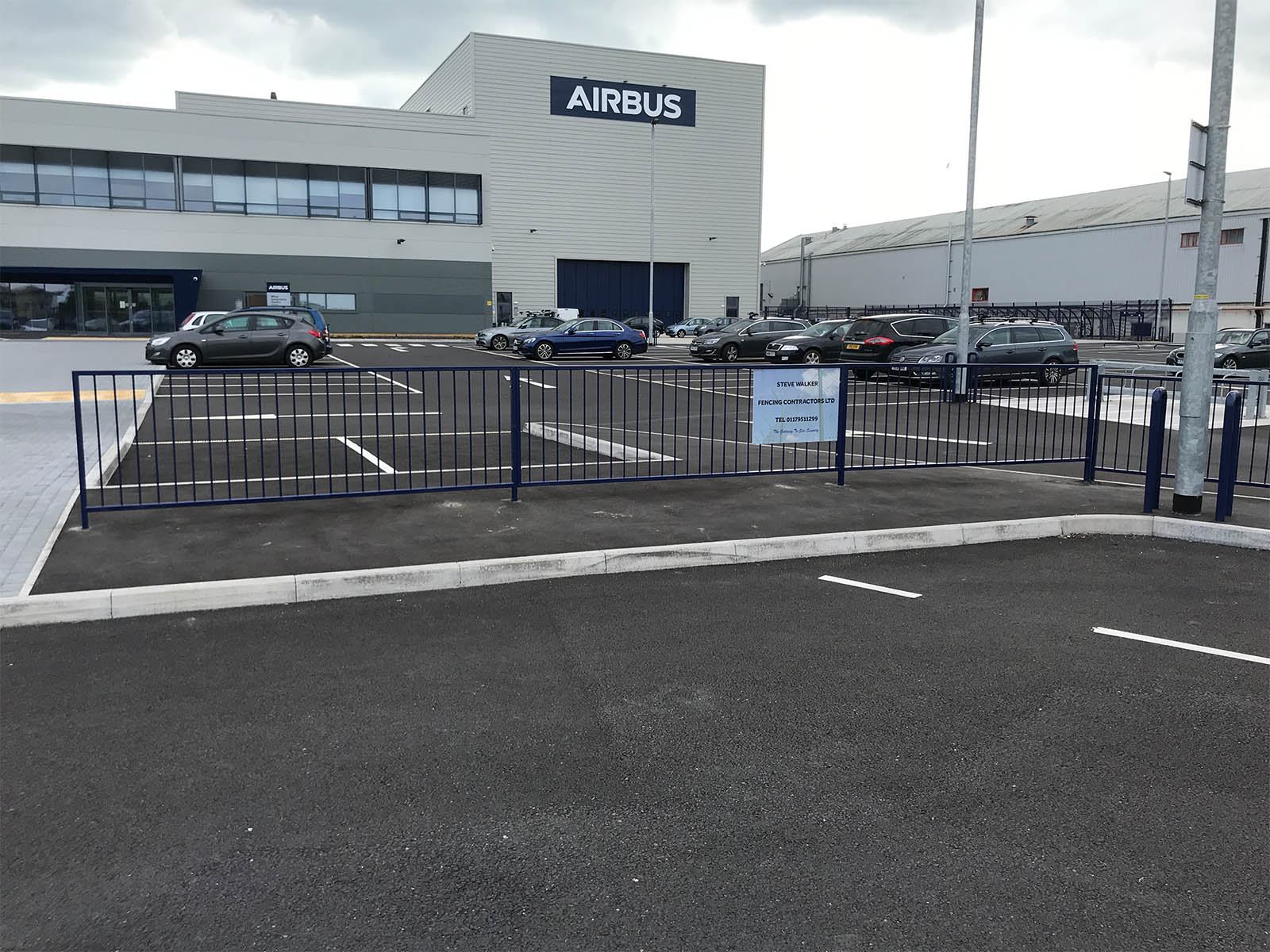 Commenting, Steve Walker said: “The new Alpha Rail pedestrian guardrail we have installed will help guide pedestrians along walkways, whereas before they were taking shortcuts over the low-level hoops and tripping over. As we used the existing sockets, there was no digging, mess or patches of tarmac left over. It worked well and gives a clean result that we are very impressed with. A lot of intricate measuring was put into this, so we were delighted to find that the bespoke guardrail supplied by Alpha Rail was a perfect fit. We are involved in a lot of projects at Airbus and will definitely be using Alpha Rail again moving forward.”

With its contemporary aesthetics and level of security it provides, the Albany Vertical Bar railings are one of the most popular styles in the Alpha Rail vertical bar railings range.

The primary purpose of pedestrian guardrail is to guide pedestrians to safe crossing points along busy highways. The most simple form of pedestrian guardrail manufactured by Alpha Rail is the M1 style, a common sight on roadsides across the length and breadth of Britain. It is a unit panel design with full height infills, requiring no extra posts.